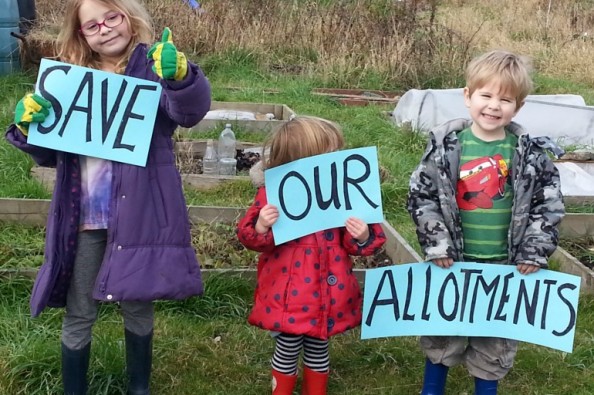 Allotment holders in Watford are fighting a third attempt by the Council to build on an allotment site that has served heavily-urbanised West Watford for 120 years.

For the third time, the Secretary of State for Communities and Local Government has agreed that Watford Council can appropriate the Farm Terrace Allotment site for a development, despite two previous decisions having been quashed by the High Court after the plot-holders challenged them. The Secretary of State’s policy – which is designed to protect allotments from development – says that consent for appropriation should not be granted if the allotments are not surplus to requirements. The Council admits that the allotments are not surplus to requirements, but maintains (and the Secretary of State agrees) that the need to build on the allotment land constitutes ‘exceptional circumstances which justify building on it anyway, despite the fact that the development will go ahead without the allotments anyway. The allotment holders believe that if ‘exceptional circumstances’ are interpreted in this way, then no allotment in England is safe, because it would be so easy for developers to assert that their application is exceptional. The case will therefore be about far more than Farm Terrace, as it will affect every local authority-owned allotment site in the country.

On 22 July 2016 a formal letter before claim was sent to the Secretary of State and the Council. They have until 5 August 2016 to respond, after which court action will start. We will keep you updated, but you can also follow developments through the campaigners’ website and on twitter @SaveFarmTerrace.