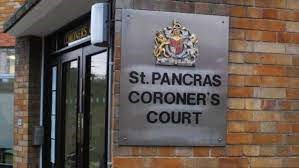 St Pancras Coroners Court has begun to hear evidence from professionals and officials involved in the management of a man who was twice released to kill again. Angela Best was killed by Theodore Johnson on 15 December 2016. She was Johnson’s third victim. He killed partner Yvonne Johnson in 1981 by pushing her over a balcony. He received three years in prison after pleading guilty to manslaughter on the grounds of provocation. He then killed partner Yvonne Bennett in 1992.  He was convicted of manslaughter on the grounds of diminished responsibility, having been diagnosed with depression and a psychopathic personality disorder. He was sentenced to a hospital order and discharged on 30 October 1997, on conditions that included a requirement that he disclose ‘any relationships with women’ and accept this will lead to them being told about his past history. This condition of voluntary disclosure was relied upon despite concerns that he may have already covered up a relationship with a member of staff at the hospital where he was detained. Johnson did not disclose his relationship with Angela Best, nor was the relationship discovered despite evidence that it was widely known amongst family, friends and work colleagues. Angela had started a new relationship when Johnson killed her.

Angela’s family said
“Our family can never recover from what we have gone through following the brutal murder of our beautiful, beloved and treasured Angela. To find out through the domestic homicide review that basic steps were not taken to protect women from this twice convicted killer, to know that that is why Angela is not here, that she had no chance and no choice: this deep trauma and indescribable pain will remain with our family for the rest of our lives. We have fought for this inquest, to make sure that all failings are brought to light and changes are made. We demand this, in Angela’s name.”

Angela’s family are represented by Clare Hayes and Sarah Ricca of Deighton Pierce Glynn, who said:
“Women have the right to equal protection from the law. If that right was respected, Angela – and the many other women who die in this country every year at the hands of men known to be dangerous – would still be here. As a society, we are indebted to every family that, faced with a death that occurred at least in part because of state failings, insists on the right to the full and fearless inquiry to which they are entitled as a matter of law. It is only through the struggle for justice waged by families like Angela’s, often at great personal cost, that real change can come about.”