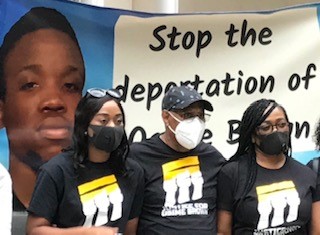 The Home Office has confirmed that it will not be pursuing its attempts to deport Osime Brown to Jamaica. Osime came to Britain with his family aged 4. He has not been to Jamaica since and has no family there. Osime is autistic and has learning disabilities. He came to be at risk of deportation following a history of failings by schools and social services that put him on the long-recognised conveyor belt for black boys, particularly those with learning disabilities, from failed schooling to prison. Andrew Jones at Wilson Solicitors LLP represented Osime in his immigration case. Rhona Friedman at Commons Legal acts for him in relation to an appeal against his criminal convictions. Clare Hayes and Sarah Ricca of Deighton Pierce Glynn represented him in his successful challenge to his proposed immigration detention. They and Shaki Sanusi continue to act for him in relation to his mistreatment in prison, historic failings by education and social services, and his ongoing need for an appropriate package of support and care.

Key to the victories won to date has been the broad-based campaign for justice for Osime, led by his mother Joan Martin, who said, ‘To all our wonderful supporters, who have been with us throughout this long and painful ordeal, who believed in justice, fairness, dignity and a country that is welcoming to everyone, no matter the colour of their skin: we thank you, you have fought hard and tirelessly by our side and together we DID IT! Now we will now fight on to clear Osime’s name and get him the support he needs.’

Sarah Ricca said: ‘What Osime has been through runs the gamut of the experiences in 21st century Britain for so many black people: disability being treated in school as a discipline issue; not just neglect by social services but positive acts that put you in harm’s way; a criminal justice system that is stacked against you; the hostile environment of our immigration laws. There has been great team-working by lawyers from different firms on behalf of Osime, and this has borne fruit in the victories to date. But tribute is due most of all to Osime’s mother, family and the campaigners who supported them in their fight for justice. Please continue to support Osime as that fight continues.’

A Guardian article can be viewed here.