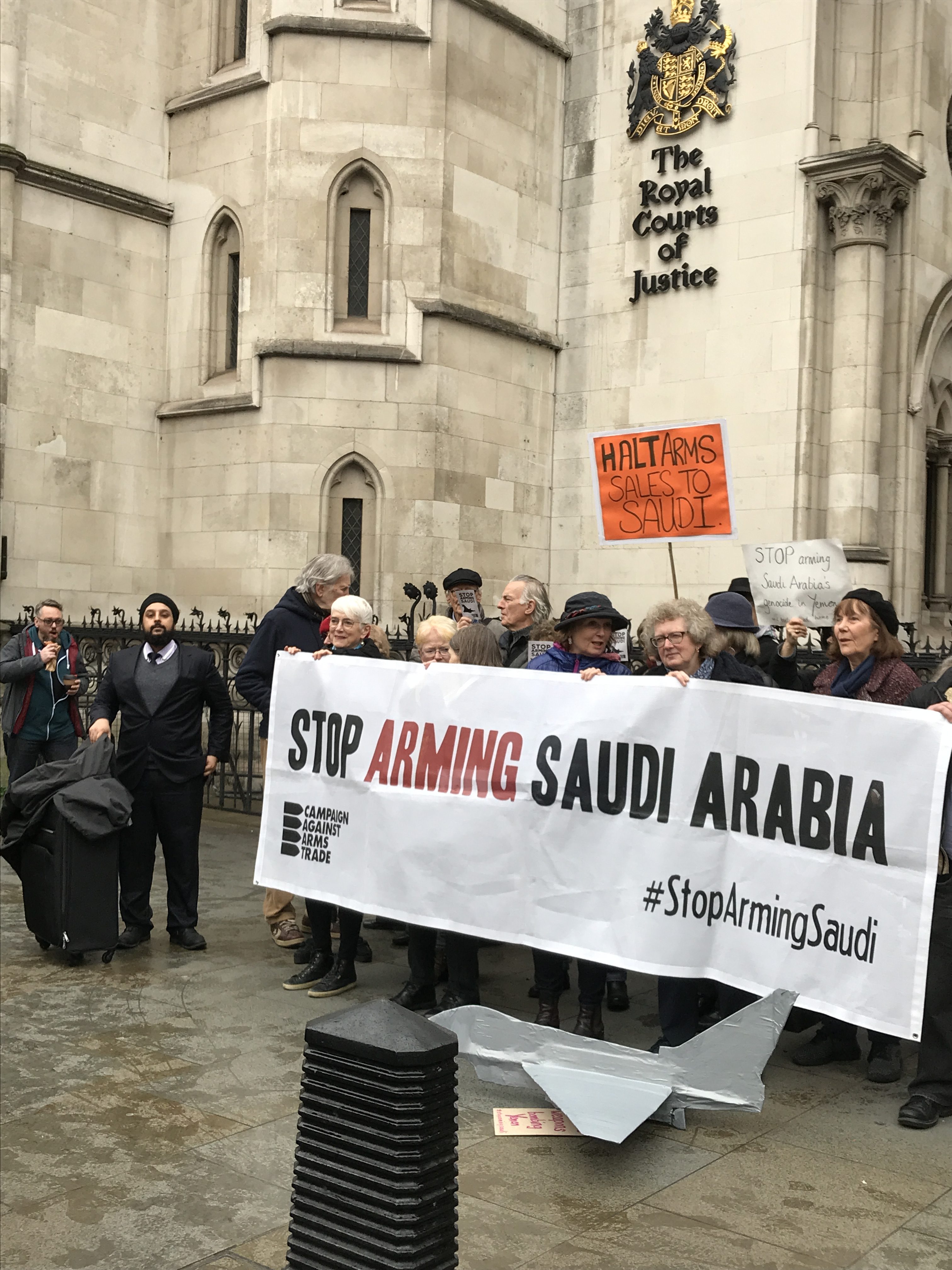 The Court of Appeal today decided that the decision by the Department of Trade and Industry (DTI) (formerly BiZ) to authorise arms exports to Saudi Arabia for potential use in Yemen was unlawful because the government had not taken into account Saudi Arabia’s past record on international humanitarian law (IHL).

What is the effect of the judgment?

As a result of the Court Appeal’s decision today, the Minister has agreed ‘not to grant any new licences for the export of arms or military equipment to Saudi Arabia for possible use in the conflict in Yemen’ until he has either reviewed and retaken decisions about new licences or applied for and been granted a stay of execution of the court judgment pending an appeal to the Supreme Court. This undertaking is recorded in the court order which gives a deadline of 4pm on Thursday 27th June 2019 for the government to apply for permission to appeal and/or a stay of execution.

The Defendant’s decisions (1) not to suspend extant export licences for the sale or transfer of arms and military equipment to Saudi Arabia for possible use in the conflict in Yemen and (2) to continue to grant further such licences are quashed; and the matter is remitted to the Secretary of State to re-take the decisions on the correct legal basis.

The export of arms and military equipment from the UK to Yemen is regulated by the Export Control Act 2002 which in turn provides for regulations controlling the licensing of exports. On 24 March 2014 the Secretary of State set out in a written statement to Parliament what were described as “Consolidated EU and National Arms Export Licensing Criteria” (“the Consolidated Criteria”) based on the EU Common Position. Under Criterion 2 C of the Common Position the UK must:

(c) deny an export licence if there is a clear risk that the military technology or equipment to be exported might be used in the commission of serious violations of international humanitarian law.

The EU Common Position refers to a “User’s Guide” which is to “serve as guidance for the implementation of the Common Position”. The User Guide at Para 2.13 states:

CAAT focused on a careful argument that the Divisional Court had failed to grapple with the question of rationality, avoiding the risk that they would be accused of challenging the decision based on the facts. CAAT referred to a large body of evidence, including evidence from the Interveners to demonstrate that Saudi Arabia has committed repeated and serious breaches of international humanitarian law (“IHL”) during the conflict in Yemen.  CAAT argued that Saudi Arabia has committed indiscriminate or deliberate airstrikes against civilians, including airstrikes which have used “cluster” munitions, and which have targeted schools and medical facilities and described their impact. CAAT challenged the government’s reliance on their continuing engagement, training and support given to Saudi Arabia, as the basis for concluding that assessment of past violations was unnecessary.  Without assessment of whether there had been violations of IHL, there was no evidence that such engagement had been, and therefore would be, effective in preventing future violations.

CAAT argued the quality of the information and the evidence from the UN and the NGOs was of such range and depth that it called for a full engagement and critique by the Secretary of State.  Secondly, some of the incidents which took place were so striking and so suggestive of violation that they called for detailed assessment as to whether violation taken place.  Thirdly, when considering the real risk of future violations, such matters as the UK’s relations with Saudi Arabia, the positive expressed attitudes of their leadership to observance of IHL and the various inputs of support and training for their military procedures, could only be a good basis for assessment of future risk if they were in fact effective in preventing violations. (judgment para 102)

CAAT had not asked for an order in the appeal that the grant of licences for continued supply of arms should be suspended, but rather that the Secretary of State should re-take the decision, on what CAAT contends to be the correct legal basis and, of course, taking into account any new material.

Key points in the judgment

The court stressed that this was a public law decision on rationality, not decision on the merits of exporting arms for use in Yemen: ‘the function of independent judges charged to interpret and apply the law is universally recognised as a cardinal feature of the modern democratic state, a cornerstone of the rule of law itself’. (para 52). “What is important for present purposes… is that the only legal error which is alleged to have been committed is founded on the public law doctrine of irrationality”.

CAAT argued that ‘the Secretary of State’s consideration of Saudi Arabia’s past and present record of respect for IHL, including whether a (historic) pattern of violations could be discerned, was fundamentally deficient’.  CAAT argued that the approach could not be rational, when other important and authoritative bodies, such as the United Nations Expert Panel, Human Rights Watch and Amnesty International have been able to make and publish such assessments, and conclude that widespread violations of international humanitarian law have been demonstrated. The court said the central contention in the case was ‘the question of whether there was a historic pattern of breaches of IHL on the part of the Coalition, and Saudi Arabia in particular, was central to the estimation of the risk of future violations.’ Para 62

Shockingly the Court of Appeal found that no ‘overall assessment” of violations of IHL was ever made’ (para 74). ‘It seems clear that the Government does not seek to assess the likelihood of a breach of IHL having been committed by the Coalition in any specific case.’ (para 83).

The role of the interveners

In the judgment the Court of Appeal confirmed ‘the long line of authority recording the importance of evidence from organisations such as NGOs and the UN’.  (para 87) Similarly, in R (EM (Eritrea)) v SSHD [2014] AC 134 (UKSC), the Supreme Court emphasised the authority of the UNHCR, Amnesty and Human Rights Watch.

The Court went on to quote at length from the powerful evidence from the Amnesty International and Human Rights Watch’s research in Yemen stating ‘… the NGOs emphasise that the material from the Interveners had “rigorous methodology”, was based on “detailed in-country research [and] … extensive interviews with recent refugees”.’ (para 90). It further noted:

“The submissions of all the Interveners emphasise the long line of authority recording the importance of evidence from organisations such as NGOs and the UN…The argument of CAAT is that there was sufficient material identified by these sources to found proper assessments and conclusions. It was wrong to discount this material as the Divisional Court did, and wrong to treat the information available to the Secretary of State as displacing or fully discounting the evidence available from the Interveners and the UN.” (Paras 87-92)

The arguments the Court rejected

The Court only found in favour of CAAT on Ground 1- the need to review historic violations point. It found the User’s Guide was not binding on the government (Ground 2). It also rejected Ground 4 of the appeal- the suggestion that the Divisional Court had erred in its approach definition of the concept of “serious violations” of IHL. The CA refused to give guidance on this issue: ‘the function of judicial review is generally to assess the lawfulness of past executive action, not to give advice for the future.’

History of the case

The conflict in Yemen began around March 2015 and a coalition of states led by Saudi Arabia launched a military campaign in support of pro-government forces. The United Kingdom has granted licenses (and refused to suspend existing licenses) for the supply of a range of military equipment and technology to Saudi Arabia for use in Yemen, including ordnance for air strikes, gun turrets, ammunition, military communications equipment, components for military helicopters and jet aircraft.

Campaign Against the Arms Trade (CAAT) against the Secretary of State for International Trade applied for judicial review challenging the government’s ongoing failure to suspend licences to Saudi Arabia for possible use by the Coalition in the conflict in Yemen.  Amnesty International, Human Rights Watch, Rights Watch UK intervened. The Divisional Court rejected the claim. CAAT were granted permission to appeal on three grounds. Ground 1 was that the evidence showed that the Secretary of State’s consideration of Saudi Arabia’s past and present record of respect for IHL, including whether a pattern of violations could be discerned, was fundamentally deficient. Ground 2 was that there was an error in relation to the Secretary of State’s failure to ask the questions identified in the User’s Guide and Ground 4 was the Divisional Court’s failure to rule on the meaning of “serious violations of IHL”.

The three NGOs were granted permission by the Court of Appeal to make written submissions in the case in July 2018 as First Interveners on  (i) the position under international law with respect to the interpretation of the threshold of “clear risk’ of a “serious violation of international humanitarian Iaw’ found in Criterion Two of the Consolidated EU and National Arms Export Licensing Criteria; and (ii) the value and unique advantages of the NGO, UN and other third party reports filed as evidence of violations of international humanitarian law on the part of the Saudi-led coalition in Yemen, as well as the methodology underpinning them. Oxfam was granted permission by the court on the same grounds to make submissions as the second intervener.

“My clients have highlighted the tragic loss of life in Yemen but it was equally important to send a signal to government that even the most politically and commercially sensitive decisions, must be taken lawfully. The international arms trade is not exempt from international law and the scrutiny of the courts.”

The Master of the Rolls Sir Terence Etherton

Claimant: Campaign Against the Arms Trade

More information – check out websites of

For an excellent background on the war in Yemen, see ‘The Saudis couldn’t do it without us’: the UK’s true role in Yemen’s deadly war https://www.theguardian.com/world/2019/jun/18/the-saudis-couldnt-do-it-without-us-the-uks-true-role-in-yemens-deadly-war