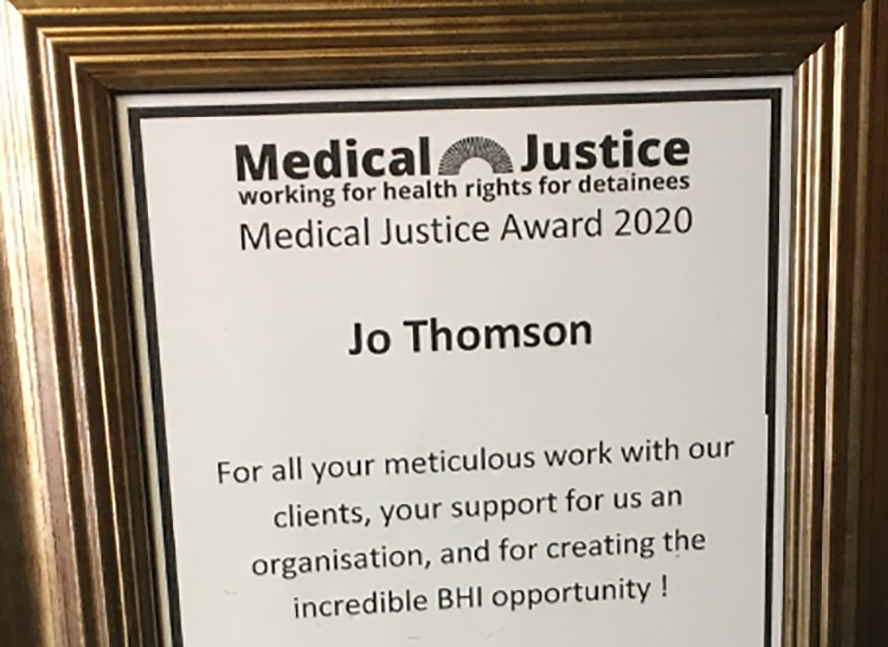 DPG Partner Jo Thomson is recognised for her longstanding support and meticulous work to secure access to justice for individuals held in the UK’s immigration detention centres.

Jo Thomson was the proud recipient of the Medical Justice Award at their recent Annual Festive Party. Jo is a longstanding supporter of Medical Justice and has for many years brought cases challenging the UK’s use of indefinite immigration detention and the mistreatment particularly of vulnerable detainees. She is routinely instructed by individuals and NGO’s wishing to challenge the UK’s inhumane immigration detention regime. She works to secure release and compensation for individuals and to secure systemic changes.

Jo was instructed in the recent successful challenge of the Home Secretary’s failure to effectively investigate abuse and mistreatment of detainees at Brook House IRC, exposed by BBC Panorama in September 2017. The case forced the Home Secretary to announce on 5 November 2019 the Brook House Public Inquiry. The Inquiry will investigate the mistreatment of detainees and the failings of G4S, the Home Office, health care and the monitoring regime, in order to identify why the appalling abuse occurred and to learn lessons to avoid re-occurrence. Jo was assisted by DPG’s Mark Hylands. Counsel for the JR and the Inquiry include Nick Armstrong of Matrix Chambers and Jesse Nicholls of Doughty Street Chambers.

Upon receiving the award, Jo was quick to recognise the incredible work done by Medical Justice in campaigning for health rights for detainees